This is my case for rap as a legitimate area for academic, musical research and attention. People variously dismiss rap music as simply vulgar, out only for shock value, and generally devoid of anything that might lead to it being considered as art. However, one needs only realize that jazz occupied the very same position about a century ago: a musical medium that was very popular with the public at large, but which was ignored by the academic music community. I hope to change that mind set. It is my belief that one day rap, having completed the same transformation as jazz music (which was adopted only after being integrated into the works of such great composers as Debussy and Ravel, two of my favorites), will be held in the same esteem. Also, even if you can’t read music, you should still be able to get something out of the following. And if you like this, you might enjoy checking out my 50,000-view article on Kendrick Lamar here, or my 40,000-view article on the most repetitive rappers here — and, if you’re really feeling up for it, check out my opus on Nas here….I mean, honestly, how could I make a website called Rap Analysis and not talk about one of the most technical guys in the game?!

Anyway, let’s get to today’s subject, which is the song “How We Do”, by Game & 50 Cent, as produced by Dr. Dre (whose production style I analyze in-depth here.) Just listen to the first 16 bars, by Game. He hears the synth bell motif (the rhythm that 50 Cent copies in the chorus/hook when he says “This Is How We Do” in staccato notes) and takes a characteristic part of it (the placement of the 2nd note of the motif on the 2nd sixteenth note in the beat) and emphasizes it. See below:

I could write a good article alone on the characteristics of that rhythm (for instance, observe how it’s beat seems to be on a dotted eighth note repeated 5 times, and the rhythm is retrogradeable – able to e reversed – in certain respects.) However, we’ll keep it simple. In the following jimmied-up transcription of the first 8 bars in text, the capitalized word is the rhyme; when the rhyming word is bolded, it means that that word falls on that characteristic 2nd 16th note of the opening synth bell motif, and when the word is italicized, it means that the word falls right on the beat. To see the verse transcribed into sheet music, scroll down:

This brings us to the end of his first 8. Notice that the rhyme the entire time has been on the syllable “uh”; Game continues this for the next 8 (an incredible thing to do, and which he does in other songs as well.) Finally, note the phrasing of his rhymes: 1/2 bar, 1/2 bar, 1 bar, a 2 bar grouping repeated three times (for a total of 6 bars,) until the final two bars of the first half of his 16, when he accelerates the phrasing and has the rhymes divided into 1/2 bar, 1/2 bar, 1/2 bar, 1/2 bar. This same structure is used for the next 8, and propels us nicely into 50’s verse. Note, finally, that in the final 2 bars (“It’s red rum…” until “slums”), Game begins to vary where the rhyme falls metrically, starting on the word “come”, which falls on the beat, continues with the word “uh” after Compton (which falls on the 4th sixteenth note of the beat), and stops with the word “slums”, which also falls on the beat. In the next 8, Game will continue to anticipate and play off the expectations of the listener, just as any good music-writer does. His next 8:

As mentioned before, the phrase structure in the second 8 is the same as the phrase structure in the first eight, except for one thing. On the word “UH” after “master p was sayin'”, he elides that 1 bar phrase into the first 2 beats of the next phrase, making itself really a 1.5 bar phrase, and eliminating the 1/2 bar phrase that came in its parallel structural position in the first 8 bars of his verse here. But what really interests me here is the metrical placement in the rhymes of “uh.” Look back at the preceding paragraph, and see how the rhyme changes between being italicized (falling on the beat) and being bold (falling on the 2nd sixteenth note of the beat, a characteristic rhythm of the synth bell riff.) Game sets up the listeners expectation, begins to vary them at the end of the first 8, and in the second 8, varies it even further. The contrast is heightened by the fact that the 2nd sixteenth note of the beat in 4/4 is a highly syncopated place to put a note (which he does in his first 8 bars), which is very different from being right on the beat and not syncopated at all (an idea which he introduces in his second 8 bars.) By the middle of his second 8 bars, the listener has no idea where the rhyme will comes next; this is what makes it awesome. 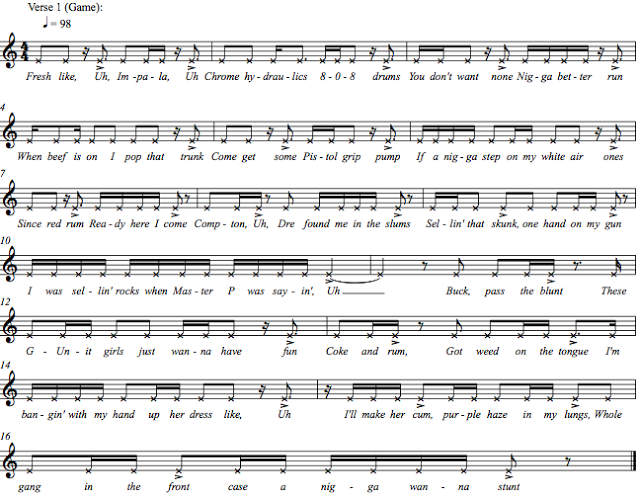 This long term development of where the accent of the rhyme falls in the most exciting thing (to me at least) in this verse. We will see short term development of the placement of the accent in the Eminem verse we take a look at next. That, as well as a variation in the pace at which accents come. For instance, Eminem always has his accents come as fast as possible in our next analysis. But Game varies the amount of his accents in order to build and release tension.

Now listen to Dre’s production decisions. The drums (bass, snare, and high hat) all strongly accent the bar as discussed before. They contrast greatly with Game’s continuing manipulation of the accent of his verse. This is why I can’t listen to the song without bobbing my head: I’m listening for the accents of Game’s rhymes against the driving rhythm of Dre’s drums. Finally, listen to how Dre doubles Game’s voice on the rhymes. He has decided to emphasize this contrast in accent. He knows some how or other that the music works like this too. This shows Dr. Dre using the supposed disadvantages of listening to music in headphones as an advantage. (For some reason, a lot of people object to rap on the basis that it can’t be played live, and therefore can’t be real art; what I think is that good producers, like Dre, simply take advantage of what recording does offer them, which is a stereo sound world that they can manipulate. Listen to Dr. Dre’s vocal tracks, and you’ll see what I mean. But that’s for another time.)

Finally, I’d like to draw attention to the uncanny chemistry on this song between 50 and Game. Like they had known each other for years, they expertly pass the rap off between themselves, while sharing and riff off of each others rhythms and verbal structures (For instance, after 50 raps, “You’re now rockin’ with the best / Fo’ pound on my hip, teflon on my chest” in his 16 after Game’s first 16, Game responds in his 2nd 16 with the response, “Ya now rockin’ with the best / fo’ pound on my hip, gold chain on my chest.” Also, see how they both use the “Touch me, tease me, kiss me, please me / I’ll give it to ya just how ya like it girl” idea.) It’s reminiscent of no less than Run DMC, who proved once and for all that rap groups can be better than the sum of their parts. It’s too bad that G-Unit broke up before this could become more.

In summary, this is what I get out of rap music. Also, I have the sheet music (all parts, the strings, etc,) transcribed if anyone wants it.

Hope you enjoyed this!

I’m working on other analyses like this one right now. Specifically, some Eminem verses, but his rhythms are just so complex (quintuplets!) that it takes a while to write out. Look for them!

**Note: my use of the word “phrasing” here varies a bit from how I use it in the next article, the Eminem, and especially from how I use it in the Nas analysis. As I’m doing these analyses one after the other, each one teaches me more and more; please refer to my newest analysis (the Nas one) for my most current ideas on all of these different areas: phrasing, accent, etc.