There are some musical artists that encapsulate and perfectly represent their eras.
The Beatles and the British Rock Invasion of the 60s.
Prince and the excess of 80s synth rock.
K$sha’s grimey, dance-rap of today.
Although these artists might move on artistically from their origins, they will always leave their influence on the years in which they came up, and those years will do the same to them.
Another one of those groups is Heltah Skeltah, coming out of Brownsville, New York, in the 90s. They’ve been getting professional love since 1995, on Smif-N-Wessun’s album Dah Shinin’. Although they’ve progressed since then, some elements of the New York rap scene around that time have never left, especially for Heltah Skeltah member Rock. On the Evidence-produced Heltah Skeltah song “Hellz Kitchen,” it’s pretty clear that Rock’s flow, while also being substantially different, is similar to none other than The Notorious B.I.G.’s flow on another song we previously have taken a look at, “Hypnotize” [http://rapgenius.com/posts/1743-Rapper-s-flow-encyclopedia-notorious-b-i-g]. Note that the direction of influence might flow in either direction, as the two acts — Biggie and Heltah Skeltah — started working around the same time. Recently, Rock has made the move to the legendary W.A.R. media record label that also includes Jean Grae and fellow GOAT Pharoahe Monch. Managed by Satori Ananda, I personally can’t wait to see what he comes out with next. My pipe dream is a W.A.R. media compilation…we’ll see what happens!
But the bone-crushing force of Rock’s rap comes primarily from his overbearing, strong delivery on the mic. You can definitely hear it on the Heltah Skeltah song “Hellz Kitchen:”
When he tells you, “Leave you feeble fuckers in puddles,” you feel like he’s talking right at you more than some other rappers when they use the 2nd person form of address. How hard he comes is a really good illustration of a concept that GOATs Jean Grae in her interview and Talib Kweli in his interview talked about. Take it away, Jean:
“What doesn’t work for one rapper might work for another. You have to get to know your voice as if it was an instrument. Know what you can get away with – how you sound, almost what the frequencies of your voice are….For instance, if you change the rapper of a verse, but keep the rhythms and words the same, the feel of the verse completely changes.” – Jean Grae
And Talib:
Composer’s Corner: You were saying you flow the best when you’re free with it. Do you mean with where your place your rhymes, how long your sentences are, the words you use, or stuff like that?
Talib Kweli: All of that, but also how relaxed it is. Even if it’s a loud beat and an aggressive rhyme, the more relaxed I am when I’m performing it, it just flows better. It melds into the track better.”
Now, there is no question that Rock knows his voice like an instrument, inside out, and knows what flow fits his voice, as Jean and Talib describe. He comes across so convincingly, as truly believing what he’s saying, that you have to be crazy in order to not feel him. Just like Talib knows to relax when he flows, Rock knows to come hard.
But those overall descriptions don’t quite capture the force of Rock’s work technically. I’ve never used this internet-speak before, but smh man, smh…Some dudes get. slept. on. And people don’t even know. I more deeply address why some rappers who aren’t very good technically might get popular while other emcees who are better rappers don’t get radio play at this article here at Rapping Manual.. The gist of it is that if you only stick to radio, or even the top Hip Hop blogs/magazines (The Source, XXL, etc.,) you’re missing out by getting to hear only one type of rapper. The abilities and technologies you need to rap nowadays are simply so widespread that there are probably thousands of mic rockers out there who are super talented but who people will never get a chance to see. Everyone’s got mics, everyone’s got some kind of access to music and the Internet. So get out there! Go to Myspace, select your geographical location, and just browse. And when you find an act you like, you can really help them out to bring more people their music. Those acts will actually return the love to you, and it will mean a lot more to them than it would for Drake or Wayne.
So for those class clowns out there who didn’t do your rap homework, you might have otherwise found out earlier about a awesome dude like Rock. Now, what have you been missing out on?
Like I said before, the strongest thing about Rap’s game is his strong delivery. That’s not only in the way he talks, but the rhythms he uses as well. Towards the end of his opening verse on “Hellz Kitchen”, after he’s laid down a few bars of pretty steady rhythms, he starts shooting all over the beat. It matches up perfectly with his boasts of gunplay. Check out, for instance, these bars: 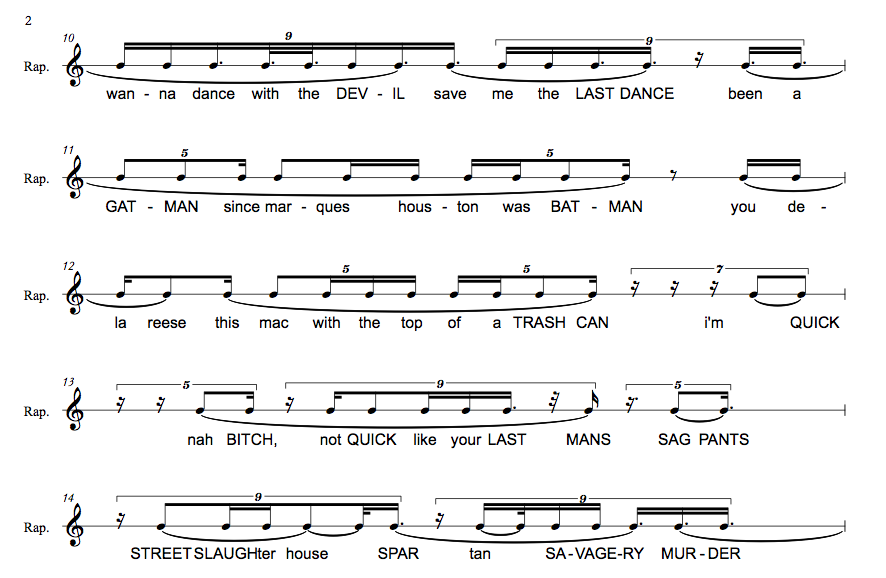 Even if you can’t read music, just look how different that representation in musical notes of Rock’s verse looks from his first few lines:

If you’re going to read the music above, there are a few things you need to know. Those black circles on the lines are the musical notes, and there’s one for each syllable Rock raps. Those curved lines under the noteheads, such as from the syllable “lis-” of “listen” to the “-in’” of “bitchin’” represents a full grammatical structure, like a sentence. Those squiggly lines in between the black, circular noteheads, like between “night” and “don’t,” are called rests, and those just mean that Rock isn’t rapping anything right there. Also, the rhymed words in every sheet music example are capitalized. If you’re still confused about the notation, just watch the video demonstration of Rock’s rap rhythms at the end of this article and your ear will sort things out for you.
Between the two images, you’ll notice that the 2nd notation looks a lot simpler. In that one, there aren’t any crazy numbers over the noteheads on the lines like there are in the first notation sample. For example, there is the number 9 over “wanna dance with the devil save” or the number 7 over the words “I’m quick.” That just means Rock has opened up the verse with a lot more regular rhythms, seen in the second image, that are easier to understand. This is a good idea to do if later you’re going to get more complex like Rock does. It gives the listener a reference point and doesn’t lose them by being too all over the place.
The complex rhythms Rock uses are called quintuplet, septuplets, and noctuplets. Those numbers just mean how the music is divided: into 5, 7, or 9 units. These complex rhythms put him into some rarefied company. The songs and rappers that we’ll be comparing and contrasting Rock’s rap against are Talib Kweli, MF DOOM, Notorious B.I.G., 2pac, and Busta Rhymes. Now, from the above list, only MF DOOM made use of rhythms that were as complex as Rock’s. The rhythms of Kweli and Busta Rhymes would be right behind him in terms of complexity. The other musical symbols we defined before, such as sentences, can also be used to compare and contrast Rock to the above rappers.
For instance, in this verse, Rock raps 212 syllables in the musical space of 16 bars. A bar is simply a musical time unit that occurs over and over in rap music. Because it always lasts the same amount of time between any rap song, we can use it as a fixed reference point to measure rap in certain ways. For instance, Rock’s 212 syllables in 16 bars means there are 13.25 syllables per bar. And the 23 sentences Rock has makes it mean that there are 1.44 sentences per bar. I also measured syllables per sentence, syllables per word, and % of syllables rhymed. Check all of Rock’s stats out below all the way to the right, and see how they match up against B.I.G., Busta Rhymes, MF DOOM, 2pac, and Talib: 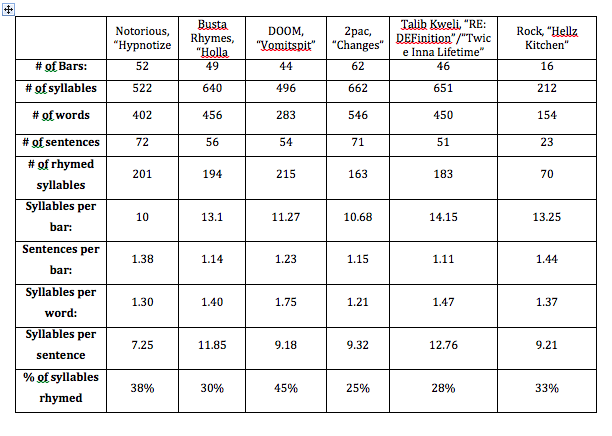 Now we see how Rock was formed by his era, and how he formed it himself. Rock is most similar to Notorious B.I.G. in his stats, out of all the other rappers there. The percentage of syllables that Rock rhymes, 33%, is close to Biggie’s 38%. Rock’s 33% rhyme rate is close to Busta’s 30% and Talib Kweli’s 28% rhyme rate as well, but those two rappers are much wordier. They have, on average, Busta’s 11.85 and Talib’s 12.76 syllables per sentence, while Rock has only 9.21 syllables per sentence. That 9.21 is close to Biggie’s 7.25 syllables per sentence, DOOM’s 9.18 syllables per sentence, and 2pac’s 9.32 syllables per sentence. But DOOM has a much higher rhyme rate, with 45% of all syllables rhymed, and he is maybe the most wordy rapper ever, having about 1.75 syllables per word. Meanwhile, Rock’s rate of 1.37 syllables per word is close to Notorious’ 1.30 rate, as well as 2pac’s rate of 1.21 syllables per word. Rock’s 1.37 syllables rate is also similar to Kweli’s 1.47 syllable per word rate, but Kweli has much longer sentences. Kweli has 1.11 sentences per bar, while Rock has 1.44 sentences per bar. That 1.44 rate is much closer to Biggie’s 1.38 sentences per bar rate than Kweli’s rate.
In fact, Rock’s style is more similar to 2pac’s than Kweli or MF DOOM, even though Rock came up on a whole different side of the country from 2pac. What matters is that they were from a similar era. I also don’t think it’s an accident that Rock’s style is more similar to Busta than DOOM or Kweli, because Rock came up in the 90s along with Busta.
(I also did analysis articles on all of those rappers. You can find the MF DOOM one here, Talib Kweli here, Busta Rhymes here, 2pac here,, and B.I.G. here here.
But Rock is also different from Biggie in some important ways. He uses much more complex rhythms than Biggie’s regular rhythms, as we see from some B.I.G. rhythms below:

You can see that there are no prime numbers like 5, 7, or 9 above the numbers. You can also listen to how Rock’s complex rhythms sound different in the video demonstration at the end of this article, or in the Biggie analysis that I linked to above.
Furthermore, Rock’s rhyming is more complex in certain ways. For instance, he is more willing to put a number of rhymes consecutively, rather than just the 1 or 2, or at most usually 6, in a row that Biggie might do. For instance, Rock raps:

In those first 20 syllables, there are 17 rhymes, and at one point, savagery to mashery, there are 13 straight rhymes. So although Biggie has a higher rhyme density, it is because his rhymes are more evenly spread out than Rock’s. Rock also makes use of consonance, or the repetition of a consonant sound. Above, the consonance is on the “m” of “motherfuckers / monster mashery…” I consider consonance to have the same function as rhyming, in that they both place emphasis on the syllable on which they occur. Thus, I treat them both the same.
Also differently from Biggie, Rock uses longer rhymes of 3-syllables. B.I.G. in “Hypnotize” has no 3-syllable rhymes, but Rock rhymes on savagery/mashery/battery. He also uses more 2-syllable rhymes than Notorious, who was more about 1-syllable rhymes.
Below, I notated Rock’s rap rhythms in music notation and play it back through a computer instrument, a MIDI triangle. I put the underlying beat to the song underneath so you can feel how complex Rock’s rhythms are:
If you liked this song, check out another one of Rock’s songs called “Rockness Monsta:”
So there. You were maybe missing out on a dude who flows like Biggie, and who might be even better than him in some respects.
Now go do your damn homework!