Today’s exclusive article will be on the musical arrangements of rap songs, instead of being an analysis on a song’s rapped words themselves. It’s similar to one where I catalogued every instrument Dr. Dre uses on his beats between 2000 and 2009, which you can find here. To hear “Monster,” the beat we’ll be taking a look at today, head over to YouTube here. (If you’re more into the rapping side of things, you’ll probably like my article on Nas called “Is Nas The Best Technical Rapper Ever…By Far?”, which you can read here. I also have an analysis of Kendrick Lamar’s “good kid, m.A.A.d city” album here, too!)

Kanye never fails to blow me away. I mean, yeah, I’ve heard Monster before, but never really sat and listened to it. My original plan to answer this question was to make a chart like this one: 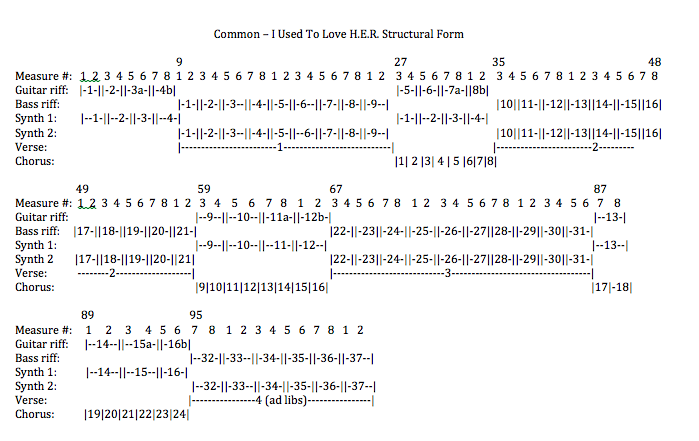 That chart describes the entrance and exit of different ideas in Common’s “I Used To Love H.E.R.” rap beat, which you can hear here https://www.youtube.com/watch?v=C99iG4HoO1c. All the chart above is simply a tracing of the entrance and exit of musical ideas as they happen during the structure of the song “Monster.”  The musical ideas are read all the way on the left. They are the guitar riff, bass riff, synth 1 idea, and synth 2 idea. The Synth 1 idea and guitar ideas you both hear right away, as soon as the song starts. The second synth idea you hear starts at 0:20, as does the low bass idea. The chart reads left to right, top to bottom, and any numbers that occur to the right of a musical idea indicate that the idea enters at that part of the song. For instance, at the number 9 to the right of “Synth 1” idea, it shows that that idea enters back at the start of the chorus because it aligns vertically with the horizontal line that starts on the “chorus” line below it. If you read the chart above, it shows a simple structuring of musical events: the bass riff and synth 2 play during the verse, while the guitar riff and synth 1 play during the chorus.

This basic structuring of musical ideas to differentiate between different sections of the song is basically what Kanye does on “Monster,” but he just takes it to an extremely complex level. “Monster” would make a chart like this 10, maybe 13 lines long, because there are so many different musical ideas in the song.  Lou Reed used a certain idea to describe Yeezus, but I think it has applied to Kanye since post-Late Registration: Kanye is fucking daring you. He’s daring you to follow him where he’s taking you, he’s daring you to even try and follow him. Remember when he throws in a sick Charlie Wilson, hype electronic chorus in the middle of “Bound 2?” (Hear it here.) It fits in NO way into the song; a fucking soul sample track that could’ve been a huge hit on College Dropout or Late Registration? Just throws it away. Kanye’s just showing you he’s bored. He’s showing you yeah, he could keep turning out “Jesus Walks” or “Through The Wire” for the rest of his life and everyone would go nuts over it, but he’s bored with it because he’s so good with it. Or on “On Sight,” when he literally explains to us how he’s bored: “How much do I not give a fuck?”, and then he breaks into a soul sample, in a reversal of the situation on “Bound 2.” (Hear it here) Or shit, he blows up “New Slaves” at the end by breaking into a classic, Graduation, Auto-tuned chorus with a sick soul sample in the back. (Hear it here.) He just doesn’t care.

This comes across in “Monster.” Kanye is literally showing off, with the number of idea he throws in there and then takes them away. I’ve always thought My Beautiful Dark Twisted Fantasy was symphonic and orchestral. This is shown in another article I wrote on a Kanye beat, which can be found here. There, I take a look at all of Kanye’s beats on My Beautiful Dark Twisted Fantasy, but in particular the song “Runaway,” which has an extremely complex structural form for a pop song. “Monster” displays the same level of intricate artistic planning. For example, “Monster” is 6:19 long. That’s unheard of in popular music, especially pop rap. Kanye especially introduces variation into the song in really subtle ways that are so finely layered. For instance, if you listen to the chorus, you’ll notice that the mix of his voice changes ever so slightly at certain points, when the gain/distortion is removed from his voice. Rick Ross’ short verse doesn’t even count as a verse; it’s like a post-intro, pre-chorus to a chorus that doesn’t come.Yes, Kanye has that organ idea that enters around 0:41, and is repeated periodically throughout the song, but not always in the same place or at the same time. It comes down to what we saw in the Common beat, which was actually made by — no surprise — Kanye’s mentor, No I.D. For instance, the jungle drum loop that has been playing since 0:21 (NOT referring to the drum snare and bass kick) is dropped at 1:43, but the organ keeps coming. But Kanye’s entering and removing so many ideas at the same time that the listener’s ear is constantly kept engaged. At the first true chorus, at 2:07, an unintelligible vocal sample is entered in the background.

All of this is encapsulated Kanye’s production approach to Jay-Z’s verse:

1. When Jay-Z’s verse comes in at 2:24, the snare/bass drum/organ are removed, and only that jungle drum loop is kept.

2. But then everything (jungle drum loop/organ/snare/drum) is brought back in at 2:37.

3. Then, (jungle drum loop/organ/snare) is dropped out at 2:58 to a skeletal structure of the bass drum beat that we haven’t heard yet (it’s in the regular drum beat, but not at the forefront until everything else is dropped out).

4. Then, at 3:11, Kanye brings that unintelligible vocal sample that first appeared during the chorus back in.

That’s 4 noticeably different layers of musical idea combinations that Jay-Z raps over in a single 20 bar verse, and 5 if you consider his a cappella rapping at the end. A similar thing happens in Nicki Minaj’s verse. The amazing there here is that the entire verse still feels unified, Jay-Z’s rap still works well over it, and Kanye has found so many different musical ideas that still work together, while he’s paced them all so well so that they don’t fight or upset the flow of the music.

As much as it pains me to say it, what Kanye does is also similar to what Dr. Dre does, but just taken to another level. I also talk about Dr. Dre’s own approach to production on his beat “Oh”, which you can find here.

Most of the time I use only musical concepts and ideas to analyze these songs, but I also have a penchant for using statistics too, in easy to understand ways; that’s exactly what I did in this article here, which measured which rappers out there today are the most repetitive…and, why, yes — Lil Jon is definitely on there!